A look at the differences between analytic vs gestalt language processors.

Part of learning about hyperlexia is learning all the fancy terminology that comes along with it, such as gestalt language processing and echolalia.

There’s a lot to learn, I know!

But hyperlexic kids are gestalt learners so it’s definitely important to learn these things if you want to support your child in the best way possible.

Yet, I know it’s easy to get bogged down by fancy jargon you’ve never heard of and that often seems to be the reality when reading about gestalt processing.

So I thought it might be helpful to compare gestalt language processing to how language typically develops. Hopefully without using too much jargon. That way you can get a better grasp on how different our hyperlexic kids learn.

Typically, most kids learn language via analytic processing and start off with single words then move to multiword phrases. And that’s probably what you think of when it comes to how language usually develops, right?

Well, hyperlexic kids, on the other hand, don’t start with single words. Instead, they learn language using multiword phrases or chunks called gestalts first. Hence, the label of gestalt processing.

So with that basic understanding under your belt, let’s take a closer look at the characteristics of analytic vs gestalt language processors so you can see how else they differ. 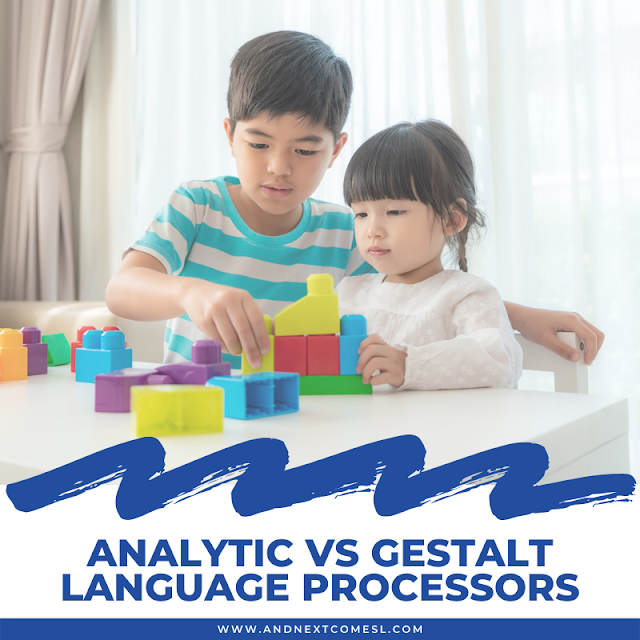 CHARACTERISTICS OF AN ANALYTIC LANGUAGE PROCESSOR

As I’ve already mentioned, analytic language processors begin to learn language by using single words, where each of those individual words carries an individual meaning.

In this method of language acquisition, you eventually move from using single words to using two or three word phrases.

As a result, language learned in this way is quite flexible and productive. After all, they’re learning single words and their meanings and can build larger sentences that reflect what they are wanting to communicate.

Grammar is also a big focus for analytic language processors. However, intonation (the pitch of your voice as you speak) develops later after they shift to longer phrases or utterances.

As noted earlier, analytic language processing is how most people learn language so it’s often seen as the default or typical way to acquire and learn language. It’s likely the method that you’re most familiar with. However, it’s not the only way to learn language… 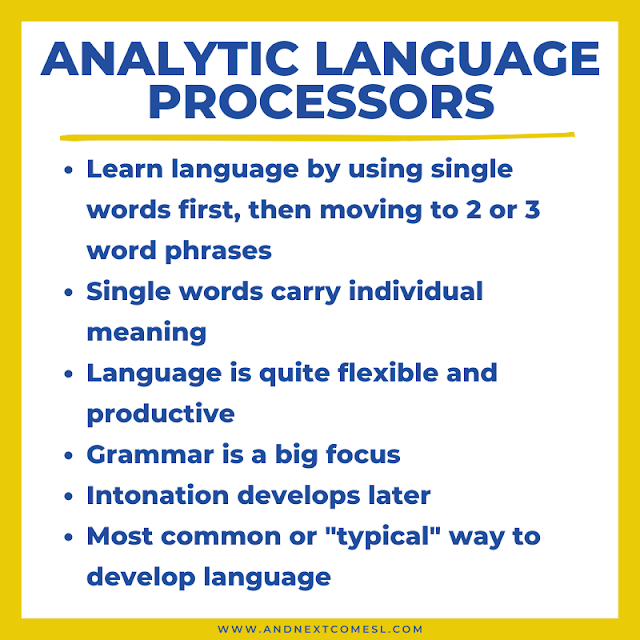 CHARACTERISTICS OF A GESTALT LANGUAGE PROCESSOR

Hyperlexic kids, as well as most autistic kids, learn language via gestalt processing. They start off learning language in chunks or phrases (remember, these chunks are called gestalts) and use a lot of echolalia to communicate.

They eventually learn to use single words at later stages in their development, unlike analytic language processors who start off with single words.

Since gestalt language processors learn language in chunks or phrases, they view the phrase or sentence as if it is one word. That means the chunks – not the individual words – carry individual meanings. As a result, language learned in this way ends up being relatively inflexible and situational.

While they use chunks that might appear to be “grammatically sophisticated” (source), they often aren’t picking up on the grammar or meaning. But that’s not surprising given that they assign meaning to the entire chunk and don’t break the chunks down until later stages of development.

Interestingly though, the language that gestalt language processors use is often rich in intonation. It’s animated and lively and somewhat musical. 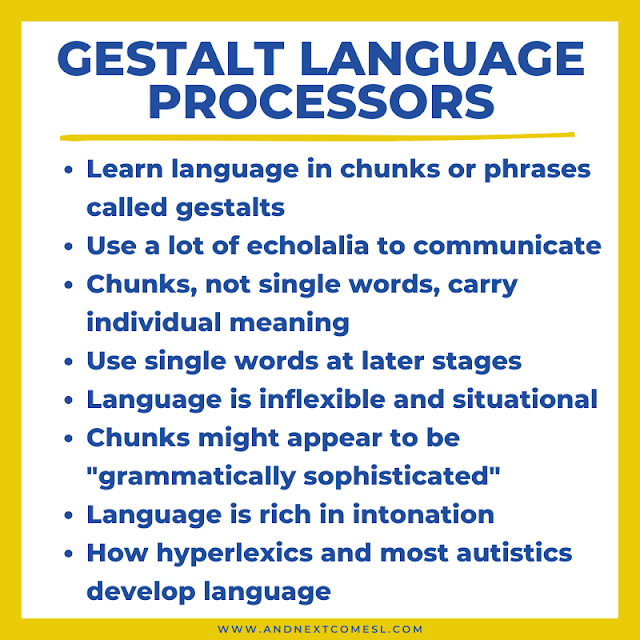 A RECAP OF THE DIFFERENCES IN ANALYTIC VS GESTALT LANGUAGE PROCESSORS 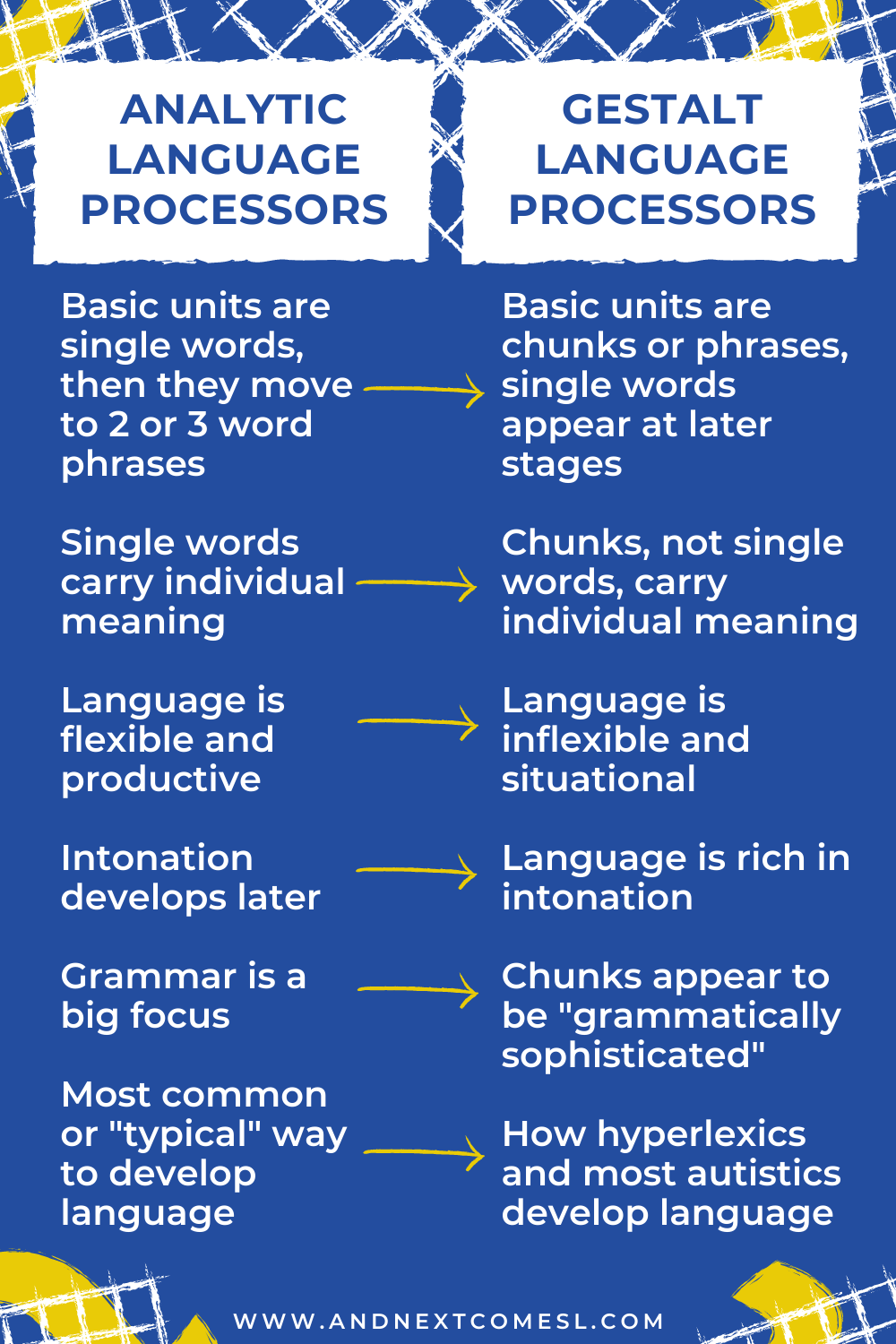 If you’re looking for a more detailed chart (with much more jargon and technical terms), then you might find this chart from Barry M. Prizant (1983) helpful. I’ve also included it below for ease of use. 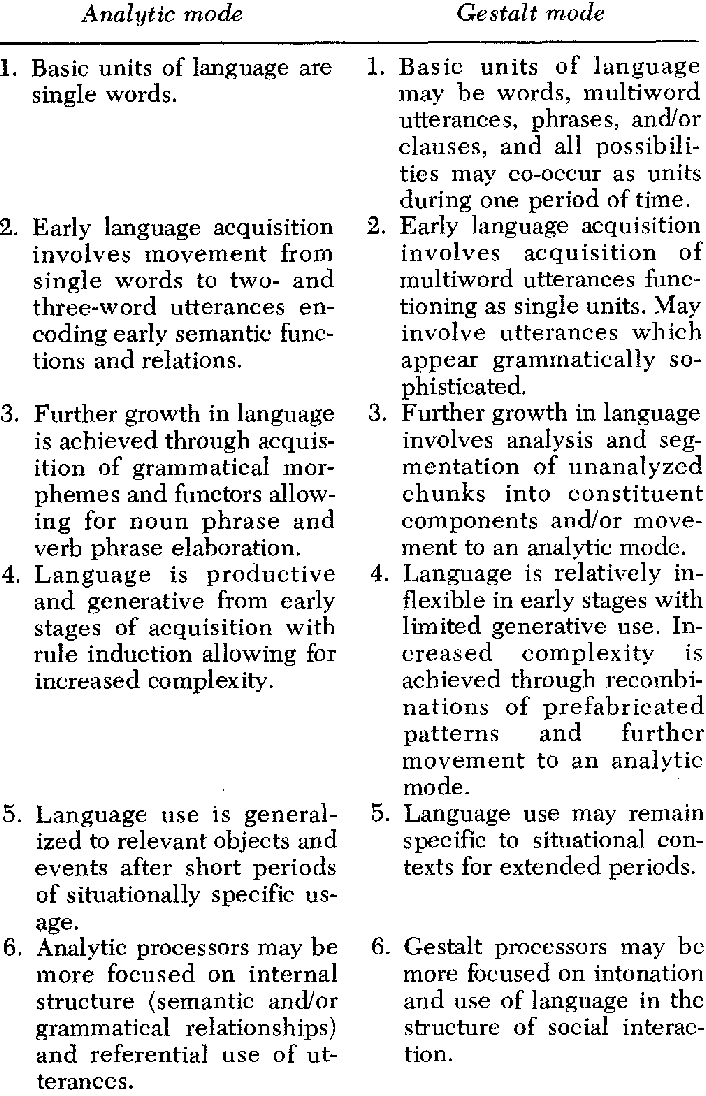 Signs that Your Child is a Gestalt Language Processor

Gestalt Learning & Hyperlexia: What You Need to Know